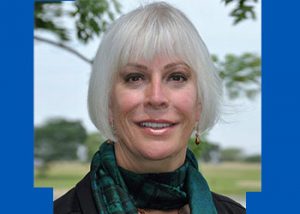 Robbi is running the day-to-day operations and does all legal (incl. patent coordination) work. She is your contact for investment opportunities.

Desalination takes away mineral components from saline water. It refers to the removal of salts and minerals from e.g. seawater to produce drinking water or from brackish water to be used then for irrigation in agriculture. It can also be applied to waste water from industrial processes such as originating during the oil and gas production process.

The leftover from desalination process is brine.

Mostly desalination is focused on the cost-effective provision of drinking water. Along with recycled wastewater, it is one of the few rainfall-independent water sources.
Source (1)

Where is desalination used?

There are approximately 16,000 operational desalination plants, located across 180+ countries, which generate an estimated 95 million m3/day of freshwater.

Currently, desalination accounts for about one percent of the world’s drinking water.

Desalination is particularly prevalent in countries located in the Middle East and North Africa, such as Saudi Arabia, the UAE, and Kuwait. Also, on small islands it is a major source of fresh water.

Due to its energy consumption, desalinating sea water is generally more costly than fresh water from surface water or groundwater, water recycling and water conservation.

However, these alternatives are not always available and depletion of reserves is a critical problem worldwide.

Desalination is particularly relevant in dry countries such as Australia, which traditionally have relied on collecting rainfall behind dams for water.

Kuwait produces a higher proportion of its water through desalination than any other country, totaling 100% of its water use.

What are the environmental impacts of desalination?

Most forms of desalination are energy-intensive. Desalination has the potential to increase fossil fuel dependence, increase greenhouse gas emissions, and exacerbate climate change if renewable energy sources are not used for freshwater production.

Desalination surface water intakes are a huge threat to marine life. Mature fish, larvae, and other marine life can be significantly injured or killed when they become trapped or sucked into open water surface intake pipes.
The State Water Resources Control Board estimates that open ocean intakes used by coastal power plants in California kill 70 billion fish larvae and other marine life on an annual basis. These same open ocean intakes are being proposed for use at desalination plants throughout California.

Brine waste also poses a potential threat to marine life and water quality, as it contains dangerously high concentration of salts and other minerals. Because of its high density and salinity, brine waste can accumulate in and around disposal areas smothering bottom dwelling species and significantly altering coastal ecosystems.

Desalination plants produce more waste brine than was formerly thought. A very famous study undertaken by Manzoor Qadir, an environmental scientist from the United Nations University, and his team made this news public in January 2019. Two of the findings in the executive summary of this study are:
Since there was no metric specifically for brine production, they used factors such as the type of input water and the desalination technology being used to approximate a plant’s “recovery ratio”—or how much brine is produced compared to desalinated water.
The literature had long assumed a one-to-one ratio. But Qadir’s study found that the average desalination plant actually produced 1.5 times more brine than desalinated water—fifty percent more than previously thought. That translates to 51.8 billion cubic meters of brine each year, which Qadir says is enough to cover all of Florida, a foot deep.
So, to make this quite clear.  If a desalination plant takes in say 100 liter seawater 40 liter will be usable fresh water but 60 liter is unusable brine that is disposed back into the ocean.
This current inefficiency of desalination plants is shown here: 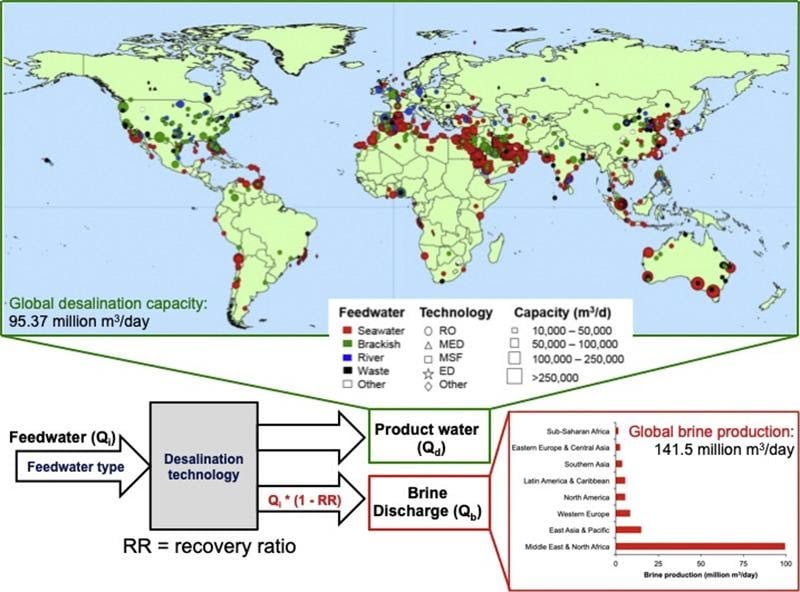 What problems does Brine cause?

On the intake side, Burt says that small organisms such as fish larvae and coral can get sucked into a plant. But the greater risk comes at the other end of the process, when the brine is put back into the ocean (where the majority of desalination is done).

“Brine will be substantially higher in salinity than normal oceanic water,” says John Burt, a biologist at New York University’s campus in Abu Dhabi. “The brine discharge is also warm.” Those conditions, he says, can make it more difficult for marine life in the immediate vicinity of the discharge to survive or thrive.

What Burt is more concerned about, however, are the chemicals that are often in the brine. Qadir’s study points to copper and chlorine as particularly troublesome compounds. These chemicals are added to the seawater at various stages in the desalination process, to control bacterial growth or reduce corrosion, and many end up in the wastewater.

But not everyone is worried about brine. “I find that fears of environmental impacts tend to be quite overblown,” said Phillip Roberts, a water resources engineer at Georgia Tech University. He adds that although Qadir’s work provides a reasonable estimate of how much brine is out there, it may be a bit of a “red herring.”

Roberts doesn’t think brine volume is a particularly useful metric, because even those totals, he argues, are quite small in the grand scheme of things. “How it’s disposed of is what matters. And we can dispose of it safely.”

Whether this statement is true or not it remains a fact that to mitigate this problem lots of money must be spent and its true protection might only show in a few years.

Like the latest desalination plants in Australia cost, 3-4 billion to build (6). The brine diffusion system cost are valued at 400 million USD alone.

It is surprising that such costly measures are undertaken and not possibly other technical solutions are tried out.

In shallower water such as the Persian (Arabian) Gulf the destructive effect of brine can be sadly witnessed where fishery is impossible and the ocean floor is a barren “dessert “, where not only fish but also all plants have been extinct by the brine disposed. (7)

As mentioned in this study and modelling:

The residual brine dumped back into the Gulf. This discharge of saltier waters impacts the marine ecosystem and may also affect dynamic and thermodynamic processes.

It is found that there are regions in the Gulf where the standard deviation may represent serious consequences for living organisms in the marine environment.

Are there other solutions to the Brine problem?

Assuming all alternatives have been looked at and desalination is the whole option it must be assured that the above environmental concerns are addressed.
Renewable energy is certainly mandatory as is the use of the most efficient desal plant technologies. Water intake must be designed accordingly to protect fauns and flora. Equally important brine disposal is to be taken care of with the best technical options.
My colleague Shahram Shafie will describe in another blog post how EFD can achieve both
So maybe sooner than one might expect will desalination get greener and less expensive and provide water-deprived nations with a sustainable solution to an increasing problem.
Of course, all this has to be looked at in a grander scale which is climate related and concerns all nations on this Planet and requires circular economic measures.